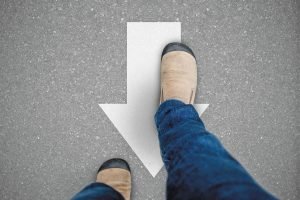 In today’s daf (Yom 53b) Rabbi Alexandri quotes a teaching of Rabbi Yehoshua ben Levi that someone who has prayed must take three steps backwards and then give (יתן) ‘Shalom’ (Peace).
In trying to make sense of this teaching, the Beit Yosef (on Orach Chaim 123) cites a variety of interpretations, including that of the Shibbolei HaLeket, who writes: ‘when a person is standing in prayer, they are standing in a holy place with the divine presence above their head. And when they end their prayer, they need to take three steps back in order to leave this place of holiness so they are then standing in a mundane place. And the proof for this interpretation is expressed by the fact that when taking the three steps back, we give ‘Shalom’ this way and that way, as if to say, “until now we were in a holy place, and we have now left to a mundane place.”’
Significantly, this interpretation is very much aligned with the personal prayer that this same Rabbi Alexandri would add after his amida (see Brachot 17a) that, ‘May it be Your will, Hashem our God, that You stand us in an illuminated corner, and do not stand us in a dark corner, and let not our hearts be pained, or our eyes dimmed’ – which suggests that the ‘shalom’ we are speaking of is our own inner peace. As Rabbi Schwab writes in his commentary on the ‘Sim Shalom’ prayer, ‘the opening phrase… is a prayer for inner peace, or peace of mind, in which one is at peace with himself’ (Rav Schwab on Prayer p. 532).
However, while I sincerely believe that inner peace should be something we pray for, I also believe there is a difference between ‘Sim Shalom’ – a request that peace be ‘placed’ somewhere (eg. within us), and ‘Osseh Shalom’ – a recognition that peace needs to be ‘made’ somewhere. Moreover, it is significant that our Gemara does not state that ‘someone who has prayed must take three steps backwards and then request (יבקש) peace.’ Instead, it tells us that ‘someone who has prayed must take three steps backwards and then give (יתן) peace’ – which further shows that the request at ‘Osseh Shalom’ goes beyond the self. But what is meant by the notion of ‘giving’ peace?
While reflecting in his ‘Thought for the Day’ on Radio 4 on the political changes that occurred in the Middle East in 2000, Rabbi Sacks offered a magnificent interpretation of our Gemara which I think shows a deep sensitivity to the word ‘give’ as found in this teaching: ‘Whenever Jews pray, we end with a prayer for peace, and at that point we take three steps backward. To make peace you have to make space for someone else. You have to give up a little of your dream for the sake of someone else’s dream.’ (From Optimism to Hope p. 18)
To my mind, not only is this an exquisite explanation of this daily practice, but also one that is fully aligned with the words of our Gemara. And ever since encountering this interpretation many years ago, I reflect – as I take three steps back at the end of my amida – about the notion of being ‘mevater’ – forgoing a little of my opinion, my desire, my expectations and my dreams, to give space for another for the active outcome of ‘making’ peace.
Understood this way, the amida ends both with a request of peace that we ask of God for ourselves, and also a call to action for peace that we direct towards ourselves – for the sake of others.
Go to Top