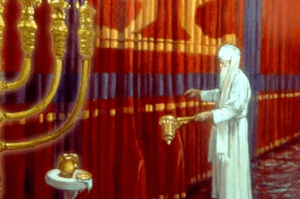 A significant disagreement in today’s daf (Yoma 57a) concerns the blood of the Yom Kippur bull and goat offerings that were sprinkled towards the curtain of the Kodesh Kodashim. Specifically, the question raised in the Gemara is whether the blood merely needed to be sprinkled towards the curtain (with its drops not needing to make contact with the curtain), or whether it needed to be sprinkled onto the curtain (such that the drops did need to make contact with the curtain).
As part of the discussion, the Gemara cites testimony of Rabbi Elazar the son of Rabbi Yossi who declared that when he (along with Rabbi Shimon bar Yochai) went to Rome to plead that several decrees be rescinded by the Romans (see Meilah 17b), he saw the curtain (which had been taken by the Romans) and that, on the curtain, were many drops of blood which – as the Gemara then proceeds to explain – were sprinkled with some drops above and seven progressively lower, in accordance of the sprinkling requirements of these offerings. Yet notwithstanding this, the Sages seemed somewhat unconvinced.
However, if Rabbi Elazar saw the curtain, then surely this should be sufficient evidence to support the view that the drops did need to make contact with the curtain? This point is raised by a number of commentaries who explain that it is possible that the law only requires that the blood be sprinkled towards the curtain, but that were the blood to make contact, it would still be permissible. Given this, notwithstanding the reliability of Rabbi Elazar’s testimony it did not conclusively prove whether the blood must make contact with the curtain.
Yet a further point is raised by Rabbi Moshe Druk (in his ‘Birkat Moshe’), based on Yoma 9a, where we learn that many of the Kohanim Gedolim during the second Temple period were not spiritually worthy, and where it is implied that some of them died on Yom Kippur while failing to fulfil their responsibilities and duties as they should. Given this, the question he asks is how can any halachic weight whatsoever be given to the blood drops on the curtain that were sprinkled by these Kohanim?
Admittedly, Rav Druk leaves this question with a צריך עיון – meaning that he did not have an answer to this question but thinks that a solution may be found with further consideration. Yet I think that it is important to note that Gemara Yoma does not specifically state that these Kohanim Gedolim performed the sprinkling incorrectly.
Still, I would like to attempt to answer his question by suggesting that while some Kohanim Gedolim did die in the midst of their improper service, if evidence exists of the service of individual Kohanim Gedolim – which in this case is the blood on the curtain – then this evidence lends legitimacy to what they did. And why do I think this? Because while it is easy to think that all actions of flawed people are flawed, then were this to be so, all these flawed Kohanim Gedolim would have died the moment they began their service.
But this is not the case, which suggests that even imperfect Kohanim Gedolim may have done some of their divine service in a perfect manner, and that we can rely on the evidence we have of what they did. And why? Because even an imperfect Kohen standing in the holiest place would have been inspired by the holiness of both the space and time in which he stood.
Go to Top