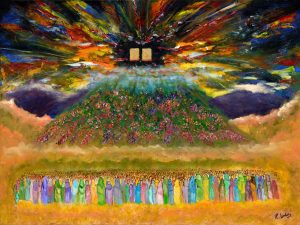 While describing the precise activities of the Kohen Gadol’s daubing of blood on the incense altar on Yom Kippur, we were previously taught (Mishna Yoma 5:6, 58b) that once he daubed blood on each of its four corners, he needed to sprinkle blood על טהרו – literally, ‘on the purity’ – of the altar seven times.
In today’s daf (Yoma 59a) the meaning of this phrase ‘on the purity’ is debated, and it is here where we encounter the interpretation of Rabbah bar Rav Shila who explains that it refers to a cleared area on the top of the altar.
Significantly, the biblical prooftext that Rabbah bar Rav Shila cites to support his conjecture is seemingly unrelated to the Yom Kippur service, and is taken from Shemot 24:10 which – while describing what occurred while Moshe was receiving the Torah on Mount Sinai – informs us that the people ‘saw the God of Israel, and under His feet was the likeness of a pavement of sapphire, and like the very sky for purity (כעצם השמים לטהר)’. Since the word ‘purity’ is used here in an unusual way to describe a ‘clear’ vision (see Rashi on Shemot 24:10), the basic meaning of our Gemara is that the Kohen Gadol was tasked with sprinkling blood on a cleared area of the altar.
However, just a brief glance at the verses just preceding Shemot 24:10 offers us a far deeper meaning of what Rabbah bar Rav Shila is teaching us, and this is because they discuss how Moshe conducted a blood sprinkling ritual at the foot of Sinai (see Shemot 24:4-8) where he sprinkled blood on the people as part of a covenant-forging ceremony – and when the people said those famous words of ‘Na’aseh V’Nishmah’ (ibid. 24:7).
And what this suggests is that when the Kohen Gadol was sprinkling blood ‘on the purity’ of the altar, he was re-enacting Moshe’s sprinkling of blood on the people and hoping that by representing the people who said ‘Na’aseh V’Nishmah’, and who yearn for purity and closeness with God, that they will receive atonement – as a people, and through his service – on Yom Kippur.
×
×