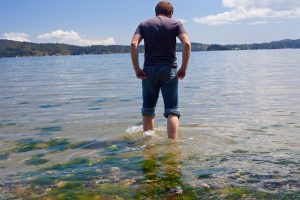 In today’s daf (Yoma 77b) we encounter a fascinating psak which highlights the broad considerations at play when a posek renders a halachic decision.

As noted in the Gemara, any form of bathing in water is forbidden on Yom Kippur. However, we are then taught in a Beraita that if a person needs to pass through a stream of water to reach a particular location on Yom Kippur – such as to visit a parent or teacher – then doing so is not considered to ‘bathing’ in the fullest sense of the term and is justified in such a situation.

In neither cases are we initially told that the people were permitted to return. But in the second case – and according to one version of the incident, after Rav Yosef explicitly instructed the people that they may not return through the water – Abaye granted permission to the people to do so, with his reason being that otherwise this would lead the people to stumble in the future (i.e. they would not come to such lectures in the future).

But also, that poskim must also take a long-term view when paskening – which is why the Shulchan Aruch (OC 613:5) permits those who traversed through water to learn Torah on Yom Kippur to return through water on Yom Kippur. Because by permitting them to return, they were ultimately encouraging and enabling to come back next year.