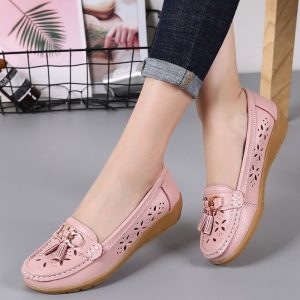 Today’s daf (Yoma 78b) discusses the prohibition of wearing leather shoes on Yom Kippur. Yet notwithstanding the severity of the prohibition, we are taught that Rabbi Eliezer rules that a new mother (which is understood to mean a woman who has given birth within 30 days) may wear leather shoes on Yom Kippur, and as the Rambam (Hilchot Shevitat Assor 3:8) and later authorities (see Shulchan Aruch Orach Chaim 614:3) explain, this too applies to someone who is unwell.
As noted by Rav Shlomo Zalman Auerbach (Halichot Shlomo: Moadim p. 77 note 37), nowadays when there are many other comfortable non-leather alternatives, a new mother or sick person should ideally wear those types of shoes rather than leather shoes on Yom Kippur. Still, if such shoes were unavailable, such permission would be granted.
Nevertheless, in a situation where such a person does have permission and a need to wear leather shoes on Yom Kippur, an additional question addressed by Rabbi Auerbach is whether they may do so in public if it is not evident to others that they have such a need. This is because there is a halachic principle of מראית עין (‘mar’it ayin’) which is generally understood to mean that people should be wary of what they do in public if it will be misinterpreted and might then lead others to do something prohibited.
In his response (see Minchat Shlomo: Tinyana 53:3, which is also summarized in Halichot Shlomo: Moadim p. 76), Rabbi Auerbach crystalizes our understanding of the concept of מראית עין, stating that when the Gemara speaks of מראית עין, ‘it involves doing something which is permissible, and only because it looks like you are doing something prohibited is it then considered prohibited…However, in the case of [a new mother and] someone who is sick, in which case wearing such a shoe is prohibited but permission has been granted in this case because [she is a new mother or because] the individual is sick, in such a situation we do not find that doing so would be prohibited on account of מראית עין… Admittedly, one should nevertheless limit any unnecessary walking [in leather shoes] in public [on Yom Kippur]… but it is certainly permitted to wear them to go to synagogue and similar venues.’
Oftentimes we limit our behaviour due to concerns of מראית עין. But what we learn from this ruling of Rabbi Auerbach is that since most Jews take Yom Kippur so seriously, if one encounters someone who is generally halachically observant who is wearing leather shoes on Yom Kippur, then there is likely to be a good reason for them to be doing so.
×
×