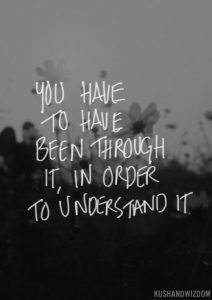 As part of today’s daf Yomi (Yoma 83a) discussion about the treatment of the sick of Yom Kippur, a stirring pasuk from Mishlei is quoted to affirm that someone who feels that they need to eat on Yom Kippur should do so – even in a situation where experts do not see it that way.

Specifically, the pasuk from Mishlei 14:10 states: לֵב יוֹדֵעַ מָרַּת נַפְשׁוֹ – “The heart knows the bitterness of its soul”, which is understood to mean that we fully rely on an individual to assess how they are feeling in order to determine their capacity to fast or need to break their fast – even more than a medical expert who most likely has a better and a more objective understanding of their ability and capacity to fast.

Yet while this pasuk is understood physiologically, it can also be understood psychologically. As Hirsch explains, ‘no outsider can fathom the depth of a heart’s sorrow’ (From the Wisdom of Mishlei p. 186). In fact, a phrase which is often overused but which can unintentionally upset or frustrate those going through a crisis, is ‘I understand’, because in many cases, we don’t fully understand what others are going through. At the same time, there are moments when the experience of one person is sufficiently similar to another that they can bring them a unique form of comfort.

A story along these lines, first told by Rabbi Ari Kahn and then later by Rabbi Paysach Krohn, involves Professor Robert Aumann, the 2005 winner of the Nobel Prize in Economics, and Rabbi Yisroel Zev Gustman (1908-1991), a brilliant Torah Scholar and Rosh Yeshiva who, having been born in Lithuania and served as a Dayan in Vilna, then moved to Brooklyn and later on, to Jerusalem where he delivered shiurim both to his yeshiva students and to the wider public, and among the regular attendees of this shiur was Professor Aumann.

As Rabbi Krohn (in his ‘In the Spirit of the Maggid’ pp. 41-43) relates: ‘In June 1982, Professor Aumann’s son, Shlomo, was a young father whose wife was expecting their second child. He was a maggid shiur in a Jerusalem mesivta. When the first Lebanese War broke out, Shlomo was called to duty at the front. Tragically, Shlomo was killed in action before his child was born. Rabbi Gustman and all the bachurim of the yeshivah attended the levayah. Then they all accompanied the yrosh yeshiva to the cemetery where they assisted in burying the young soldier. After the burial, Rabbi Gustman walked among the gravesites of other Israeli soldiers killed in combat, his face twisted in anguish. “They are all holy,” he said reverently, “every single one of them.” On the way home, Rabbi Gustman asked that he be taken to the home where the Aumanns were sitting shiva. He came in and sat down next to the grieving professor. “I appreciate that you came to the cemetery, but now it’s time for the rosh yeshiva to be back in the yeshiva with his talmidim.” To this, Rabbi Gustman said the following:

“I don’t know if you know this but I had a son named Meir. He was a beautiful little child. The Nazis grabbed him from my arms and shot him in cold blood… My Meir is a kadosh, he is holy – he and all the six million who perished are holy… I will tell you what is transpiring now in the Olam HaEmes (the World of Truth) in Heaven. My Meir is welcoming your Shlomo into the minyan and is saying to him, ‘I died because I am a Jew – but I wasn’t able to save anyone else. But you, Shlomo, you died defending your fellow Jews.’ My Meir is a kadosh, but your Shlomo is a shaliach tzidbbur – he served Klal Yisrael.”

Rav Gustman paused, lowered his voice and said to the bereaved father, “I never had the opportunity to sit shiva for my Meir; let me sit here with you.”

Professor Aumann looked up at Rabbi Gustman and said with tears in his eyes and a lump in his throat, “I thought I could never be comforted, but Rebbe, you have comforted me.”