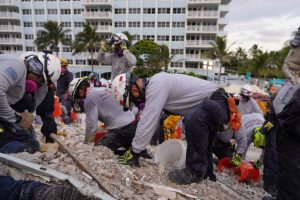 As I’ve previously explained about my daily learning ritual, each morning I learn the daf, I review it, and I then consider which passage, statement or idea I wish to explore or explain further – at which point I study a range of commentaries relating to that passage or teaching, and then start writing.

In terms of today’s daf (Yoma 85), much of the second half of the daf overflows with a variety of profound ideas relating to atonement, forgiveness, and the unique spiritual effect of Yom Kippur. However, most of the first half of the daf teaches us that if someone is buried under rubble and we are unsure if they are dead or alive, then everything must be done to save them.

And then I think of Surfside. I am reminded of those many dedicated men and women who have worked so hard to try and find survivors and bring dignity to the dead, and I am overcome by the fact that these words which I see on this page of Gemara have – in the most difficult of situations – had to be put into practice. Simply put, today’s daf needs no commentary, because it is found in the visible sweat and tears of those who have been tirelessly working on that site.

However, I do want to mention one particular message which was expressed by Colonel Golan Vach a few days ago who, when asked by a journalist about finding bodies on the site, responded: “We found people. Unfortunately, they are not alive.” In these few words, Colonel Vach communicated a profound message which is that when a tragedy occurs, and even if it looks unlikely that survivors with be found, those who are pulled out of the rubble are people; not mere bodies.

Unfortunately, when tragedies occur, there is a tendency to quantify loss in terms of numbers. However, Colonel Vach – a religious soldier who is undoubtedly familiar with today’s daf – reminds us of the simple Torah teaching that even when a search is sadly unlikely to lead to the discovery of further survivors, searchers will continue to look for people, even if – tragically – they are not alive.