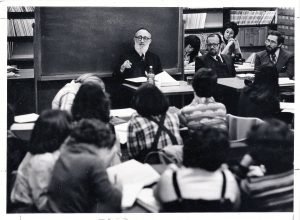 We are taught in today’s daf (Yoma 9a) that in contrast to the first Beit HaMikdash which stood for 410 years and which was served by 18 Kohanim Gedolim, more than 300 Kohanim Gedolim served in the second Beit HaMikdash which stood for 420 years. Still, we are then told that there were a number of righteous Kohanim Gedolim during this period such as Shimon HaTzaddik (who served as Kohen Gadol for 40 years), Yochanan Kohen Gadol (who served for 80 years), Yishmael ben Pabi (who served for 10 years) and also R’ Elazar ben Charom (who served for 11 years). Based on this we learn that the spiritual leadership for much of the second Temple era was bitterly disappointing and that aside from those righteous listed above, כל אחד ואחד לא הוציא שנתו – ‘none of the Kohanim Gedolim held the position of Kohen Gadol for a year’.
Significantly, an extra line of our Gemara appears in the Ein Yaakov – itself based on Yoma 18a – which sheds a little more light on these Kohanim Gedolim who were not of high spiritual standing: ‘Rabbi Yochanan ben Torsa said: Why did all this happen? Because during this period of time the position of Kohen Gadol was actually acquired for money, as Rabbi Assi said: Marta the daughter of Boethus gave three kav of [gold] dinarim to King Yannai to appoint [her betrothed husband] Yehoshua ben Gamla as Kohen Gadol.’
Clearly this teaching suggests that Yehoshua ben Gamla would not have been worthy of the position of Kohen Gadol without it being bought for him. However, if this is true, it directly challenges our perception of him since we are told: ‘The name of the man who should be remembered for the good is Yehoshua ben Gamla. If not for him, Torah would have been forgotten from the Jewish people’ (Bava Batra 21a) – and this is because it was Yehoshua ben Gamla who established free Jewish schooling in every province and in every town.
The Ritva, in his commentary to Yoma 18a, offers two answers to this question: Perhaps there were two Yehoshua Ben Gamla’s – one who was a less than ideal Kohen Gadol, and one who was the visionary Jewish educators. Or perhaps they are one and the same person, and אחרי כן הכשיר עצמו. Meaning that it is true that Yehoshua ben Gamla initially held the position of Kohen Gadol because it had been bought for him. However, he then bettered himself. He grew as an individual. He did teshuva. And over time he became synonymous with local and accessible Jewish education which was not just the privilege of the few, but the right of the many.
Like this second explanation about the life trajectory of Yehoshua Ben Gamla, there are many Jewish educators whose earlier chapters of their life were not reflective of their later life that has been dedicated to Torah values, and like him, it is often because they strayed or made mistakes in their younger years which drove them to reflect and to spiritually improve, and which then inspired them to help others understand the power of education as a transformative tool for self-growth, self-improvement and the betterment of society.
And what did he do? Having worn the crown of priesthood not due to his own merit but due to money and influence, he turned his life around and created a system where rich and poor were given equal access to the crown of Torah. As Rabbi Sacks explains, ‘one of the most stunning gestures of Judaism was to overturn the whole idea of a hierarchy of knowledge, for if there are inequalities of learning, they will be replicated through all other social structures, giving some people unwarranted power over others. This is the great insight of the Jewish vision, from which all else followed: A free society must be an educated society, and a society of equal dignity must be one in which education is universal’ (Radical Then, Radical Now pp. 125-126).
×
×